Extract from my overland diary from 36 years ago. Can’t believe I was so wimpy as to not join the wild Turkish swimmers …

Turks swimming and hunting near us – very noisy as usual.  Geoff [driver] told us as we left that often wolves and bears here in Nov in the area!  Lovely view along Lake, climbed higher – 7000 ft up.  Above snow line later in day.

Stopped to spend last lire in little town – great curiosity.  Booze shope discovered – but I’d spent mine by then!  Veiled woman fell in river – couldn’t see where she was going.

Road blocked because of blasting – one blast, then we gathered to take pictures of 2nd go.  Made us all move back – general chaos.  Little man climbing about on rocks, no one seemed to take much notice.  Had to wait after blast for bulldozers to move in; then followed sheep trucks etc over rickety new road.

Last stop in Turkey for cay – after dark, men appeared from nowhere, pressing all around, especially in cay shop.  [Geoff ordered back on bus.]  On way out, all got touched up, really horrible.

Drove late to get over border because of what happened to other trips on that road.  Dossed down in customs hall for night!  Had some lovely cherry liqueur!  Vicious looking sheep dog – in fact not aggressive.  (Can hold own vs wolves).” 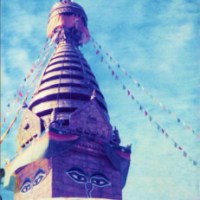