[It was chill-out time in India’s capital city and then a meander through the bazaar area, Chandni Chauk, and a hot-bottom ride into Connaught Circus in central New Delhi.]

“Had a lazy half a morning – coffee and actually cleaned my shoes!
Went into Delhi with Jan, Chris and Nicki by foot.  Walked up to Red Fort – I acted as official guide much to annoyance of real one who kept insisting he knew more than I did!  Had a coffee in the arcade.  (Red Ford built in 1600s by Shahjahan – put in prison by his third son who also bumped off his brothers to become Moghul)

Walked up to Chandi Chauk – very busy; amazing characters, people selling flowers of bright orange and yellow.  Women with baskets of mud on heads.  Great amount of drapers – cheap looking garments and loads of bright clothes.  Bazaar looked a bit too dingy.  Got scooter rickshaws to Connaught Circus – me and Jan got into a real heap – there was smoke coming up behind the seat and by me; my seat was red-hot!

Chris and Nicky took us to the Indian coffee-house up a lift – a real grotty cafe, but with waiters dressed in white with green cummerbunds and hats with parrot crest-type top.  Had 6 chips and a coffee!” 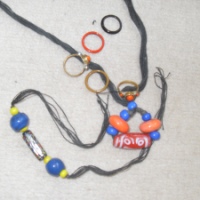