Amusing look at the reality of a writer’s life from Laura Kemp! 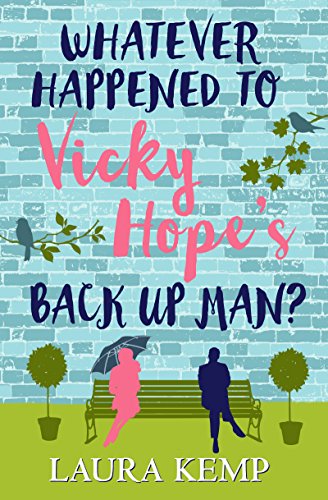 I’m delighted to be joined by author Laura Kemp. I read and very much enjoyed The Late Blossoming of Frankie Green last year – you can read my review here. Her latest book Whatever Happened to Vicky Hope’s Back-Up Man?, was published by Aria on 1st January – buying links are at the bottom of this post. Laura is sharing eight things she thinks you need to know about being an author. Read on to find out more!

Eight Things You Need To Know About Being An Author…

Being a writer-publisher can get you into some amazing situations – far from the laptop and library!

The most recent was Belladrum Tartan Heart

Jenny Brown and myself in The Verb Garden

Music Festival in the Highlands of Scotland (@BelladrumFest), where I took part in a panel on Writing and Publishing a Bestseller. Along with top Scottish literary agent, Jenny Brown (@agentjenny), and founder of Canongate Books, Stephanie Wolfe Murray, we spoke to an audience in the ‘Verb Garden’ – a large tent with comfy sofas – and were introduced by veteran journalist, Maxwell MacLeod.

While the Verb Garden hosted a range of interesting events – from political debates to a talk by Rupert Wolfe Murray about living in Tibet (@wolfemurray) – there was a whole host of fun and musical events going on all around.

Bananas take a break from dancing for a cream tea!

All set in the beautiful surroundings of the Belladrum Estate near Beauly. Highly recommended for all ages! Tartan Heart Festival.

Are you more likely to be taken seriously submitting work as a writer if you are male?

Just wanted to share this interesting article by writer Catherine Nichols who got nowhere submitting a novel under her own name so, in desperation, reinvented herself as ‘George’! The results were quite different.

Does it vary depending in which country you live or the type of book you are writing?

Has anybody experience of submitting under a different gender? If so, did it work?!

It began with a vodka bottle (not mine) delaying my train – the guard announced that a bottle had got stuck in the door. “It’s not the first time I’ve been defeated by a bottle of vodka,” he announced, “and it probably won’t be the last!”

But vodka trains and a tube strike didn’t stop me from getting to London and my first Romantic Novelists’ Association (RNA) Conference (although I’ve been a member for years) which was a great event. Three days of action-packed talks, workshops and socialising – wow, do romantic novelists know how to party – the temperatures in and out of the conference halls in East London soared!

How to get editors excited! Gillian Green of Ebury (@GillianGreenEd) loves a snappy ‘elevator pitch’ – best one at a recent acquisition meeting was, ‘Robinson Crusoe set on Mars’ !!

Online book reviewers – Lovereading want a review to be a “piece of passion” not boring publishing blurb; The Little Reader Library and The Worm Hole have an open author policy (ie will read self-published books too) – Charlie at Worm Hole loves anything about history or castles while Lindsay at LRL prefers to read print but will review ebooks too. Anna at We Love This Book (run by the trade magazine The Bookseller) must be wowed by the first page in deciding what to review and won’t take self-published.

Multiple genre author, Jane Holland (@janeholland1 who writes under an impressive dozen or so different names!) suggests setting up a different social media profile and brand for each pseudonym – she uses Facebook, Twitter, Tumblr, Pintrest, Linkedin, Instagram, You Tube – and don’t forget which ‘author’ you are when posting to your fans! Use a quote from your book on a promotional card or a picture to conjure up the brand.

Reader Insight – the use of statistics and info on readers garnered from social media – Kate Harrison (@KateWritesBooks) opened up a brave new world where sales rankings, Amazon page reads, web page visits, YouGov profiles, Goodreads reviews can all be used to build up a profile of your ideal reader – their likes, brands, hobbies. Then go and interact with them and give them what they want!

Marketing guru, Alison Baverstock (@alisonbav) told us about planning a marketing strategy – it’s an ongoing process from developing relationships with readers on social media to organising review coverage of a new book – “tempt but don’t tell too much or they won’t want to buy it!”

Urine in medieval times was a sought after resource (there is nothing we authors won’t discuss!) – used in bleaching, tanning, shrinking cloth and dyes. This was just one of the facts learnt in an entertaining hour on historical research led by Joanna Hickson (@joannahickson) and Jenny Barden (@jennywilldoit).

Best of all were the meet ups, chats, gossip and laughter with fellow writers – both with friends from the Border Reivers Chapter in Northumberland and with new friends made at the conference. Big Thanks to Jan Jones (@janjonesauthor)for carrying out the mammoth task of organising the conference so well and to Kate (@katyhaye)for looking after the ‘newbies’ with our special sparkly badges.

Roll on next year!